In 2008 St. Mary the Protectress Ukrainian Orthodox Cathedral, in Southfield, MI, saw a new beginning, a renewed commitment to the future of the Orthodox Church. In September of that year the parish organized a new chapter of the Junior Ukrainian Orthodox League. Under the guidance of their Spiritual Advisor, Father Paul Bodnarchuk; Senior Chapter Advisor, Liza Symonenko; and newly elected president Natalie Serdiuk, the chapter began to take shape. As the saying goes, “Mighty oaks from little acorns grow,” and the parish has a plentiful harvest of acorns, 17 of which are registered Jr. U.O.L. members.

Over the course of the last couple years the chapter has grown into a stable and integral part of this parish. The children have taken Christ’s instruction to “let their light shine before all men” literally, by serving those in their own congregation and beyond. 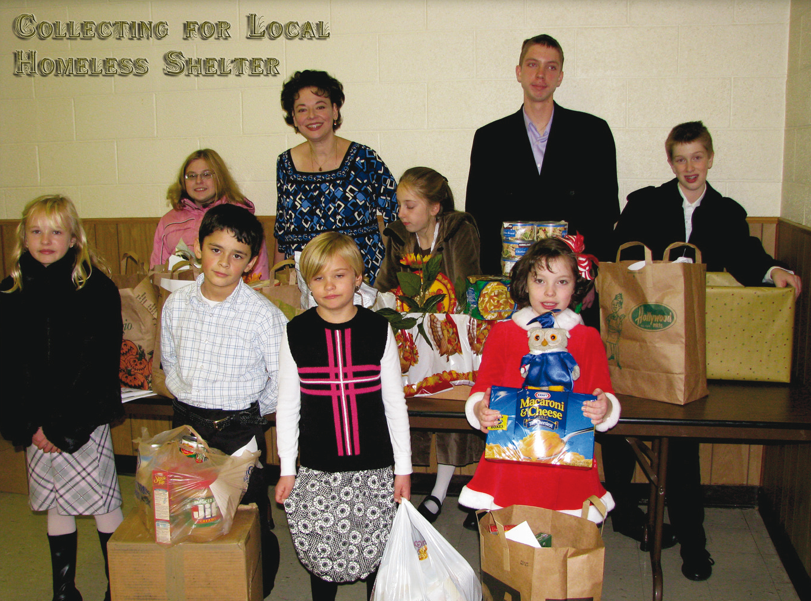 Chapter members have undertaken a number of activities in their efforts to be of service and to aid others. The parish has benefited from the children working in the kitchen, providing food to break parishioner’s Sunday morning fast, holding annual Christmas and Pascha stores (where parishioners can acquire many items needed to celebrate the holidays – from kutia to kovbasa), participating in church services, planning and performing a Christmas program, decorating the church for holidays, creating, printing and passing out commemorative bookmarks, icons and leaflets to mark various Church Feast days, delivering Holy Water during Theophany to the elderly and shutins, as well as blessed Easter baskets during Pascha. The local community has benefitted from the children collecting non-perishable foods for a local food pantry, clothing and toiletries for St. Herman’s Monastery (homeless shelter), cleaning gravesites of parishioners, as well as strangers, writing letters and sending funds to support the OPM (Orthodox Prison Ministry).

In 2009 the Jr. U.O.L. chapter from our parish was awarded the “Chapter of the Year” award during the annual Ukrainian Orthodox League Convention. This was quite the accomplishment considering it was the chapter’s first year in existence. In their second year, 2010, the chapter has earned awards in the Cultural Contest for the category they entered. Additionally, the children once again entered the essay contests for their age groups and brought home a number of awards, certificates and icons. More important than the recognition and awards, is the fact that the children are growing in the way’s of the Lord – learning to love and care for their neighbors, learning compassion, selflessness and dedication to the Church. Not only are they Ukrainian, they are Orthodox – the best of both the physical and spiritual worlds. All these activities aid our children, our little acorns, to spread their branches and reach towards God. May they continue to grow tall and strong in their faith. May Christ, our God, always be with them, helping them, guiding them and motivating them to do His work!